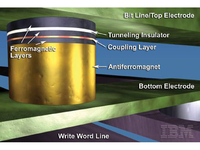 When we looked at a new kind of memory from IBM called MRAM last August, we had no idea anything would come of it less than a year later.

According to Toshiba, its work on magnetoresistive random-access memory is ready to bear fruit in the shape of postage stamp-sized 1 gigabit MRAM chips that are almost ready to replace the currently common DRAM [subscription link].

MRAM improves on DRAM by operating more quickly and holding data even when the power supply to it is turned off, meaning it uses only around 10 per cent as much electricity. Moreover, an MRAM-based computer would be able to boot up instantly.

Toshiba’s researchers have been able to overcome the vulnerability of MRAM to heat fluctuations by using a technique similar to that of IBM called spin-RAM, which manipulates the memory’s magnetic polarity using electric currents.

Considering that DRAM sales in 2006 were worth over £16 billion, the impact of a replacement technology is guaranteed to be substantial. Current projections from Toshiba see MRAM taking over around 2015.