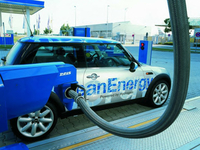 Electric and hybrid cars are clearly going to be a big part of the near future, but the problematic cost and durability of the batteries they require still need to be addressed.

Doing precisely that in Japan, however, we have Hitachi Maxell and several research partners, who have come up with a lithium-ion battery that appears to solve both problems.

The new cell has a discharge capacity 20 times larger than that of current Li-ion batteries, which means it’s more than capable of driving a car engine on its own.

Cobalt gets the boot

On top of that, the device can be made far more cheaply, as it dispenses with the cobalt typically found in Li-ion batteries. The price of the rare metal is currently rising rapidly, forcing manufacturers to design it out.

Instead, manganese with a dash of undisclosed nanotechnology sauce does the job of storing electricity and, it seems, does it far better.