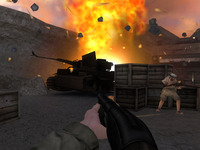 Microsoft has announced that DirectX 11 will be releasing later this year, delivering a range of bleeding edge new graphics tech for PC gamers.

DirectX 11 will be completely compatible with DX10 hardware, so there will be no need to run out and upgrade your video cards, yet again!

Microsoft claimed at Seattle's Gamefest event this week that DirectX 11 will feature new shader technology which "lays the groundwork for the GPU to be used for more than just 3D graphics, so that developers can take advantage of the graphics card as a parallel processor."

In addition to DX11's new shader technology, gamers can also look forward to a load of other new tech, including support for tessellation so models will look more refined and smoother up-close; and multi-threaded resource handling to help games utilise multi-processor set-ups more effectively.