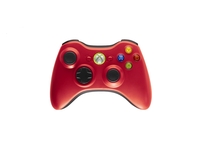 Each pad is to be bundled with rechargeable batteries and the Play and Charge cable - so no more running out of batteries at that vital point in Halo 3 or Gears of War!

The controllers will cost $64.99 in the US and be released at the end of September.

No word yet on UK or European pricing or release, but expect that to follow pretty soon.