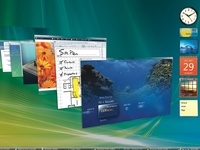 Microsoft has made changes to its updater that it insists will speed up the time it takes to scan Windows machines by as much as one fifth.

The changes to the updater - which allows people to automatically put the latest patches and software changes onto their machine - are not cosmetic but Microsoft insists that it should speed up the time it takes to scan machines and see if updates are needed by 20 per cent.

What are they doing?

"So what are we doing this time?" asks the chummy official blog. "Well, this particular update won't really change the way the client looks or feels to you, but you may notice some improvements in the length of time it takes Windows Update to scan for updates and how quickly you'll receive signature updates.

"For example, in this update, we've invested heavily in reducing the amount of time it takes the Windows Update agent to scan to see if new updates are available. In this case, we've seen some instances of the scan times on some machines decreasing almost 20 percent."

With current research suggesting that 40 per cent of people are using old software that could put themselves at risk to malware and hackers, Microsoft is obviously keen for its programs to be kept up to date.

Of course, for those people who prefer to schedule their own patches, this will all make very little difference.