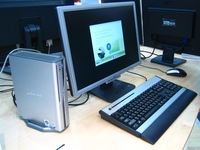 A team of scientists at the Machine Learning Department at Carnegie Mellon University in Pittsburgh have programmed a computer to read brain scans for specific words.

According to Reuters, the team of bods asked nine volunteers to come up with 58 words, while they mapped the brain activity associated with each word. They analysed the brain patterns by functional magnetic resonance imaging, which can scan real-time brain activity.

Speaking about the experiment, Tom Mitchell, head of the study, said: "We gave instructions to people where we would tell them, ‘We are going to show you words and we would like you, when you see this word, to think about its properties’."

They asked nine people this question over the 58 words and then got an average brain image for each word.

Once this was done, they fed the images into the computer and asked the computer to choose which brain image went with which word. It passed the test.

"We believe we have identified a number of the basic building blocks that the brain uses to represent meaning," said Mitchell about the successful outcome.

"These building blocks could be used to predict patterns for any concrete noun.

"I want to basically use that as a kind of scaffolding for studying language processing in the brain."

The team will next*study brain activity for phrases, rather than just singular words.