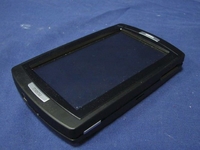 MSI, the Taiwan based electronics company, is making moves into the personal navigation / PMP market, and has unveiled the MS-5654 courtesy of the FCC.

It also has audio and video playback, so assume the usual suspects will play on it. However, no word on maximum size of memory card it can take, so you may be stuck with just 4GB of space at best.

It does have a headphones jack as well, so at least that shows this device is being aimed at both the navigation and portable entertainment markets.

But only USB 1.1? Come on, that’s positively dark ages…it will take a week to sideload all the episodes of Firefly.

No word on price or release date, but then again that’s not what the FCC is for, is it?