New Blackberry Thunders back into view 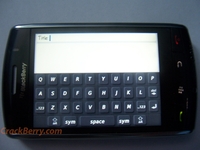 Research in Motion (RIM) has been hard at work trying to scupper Apple's attempts at mobile domination, and more spy shots of the rumoured Thunder have been unleashed.

We're seeing some fairly basic keyboard skins for the new device, running the BlackBerry 4.7 OS, but the idea is to make typing just that little bit easier.

The rumours are the haptic feedback will feature a clickable screen to make it feel like you're actually pressing physical keys.

However, all the negative publicity about iClones and their capabilities has been exacerbated by the popularity of the iPhone 3G and word is reaching the newswires that the new Thunder is in all kinds of development trouble and won't be hitting production for nearly six months.

The Boy Genius Reports&hellip;umm&hellip;reports via an unnamed source: "The Thunder is in no way shape or form market-ready. If Bold was any indication, Thunder won't be ready for at least another four to five months."

The Thunder also has some unsightly screen ripples whenever pressed, lags badly when buttons are used, the accelerometer goes nuts all the time and the clicks are a bit haphazard.

The source goes on to say: "Most of the people who have handled it think it's a joke."

So while all the RIM fanboys are proclaiming the iPhone as a 'pretty but too slow' device, the Thunder won't be able to steal any clout from the Apple bandwagon just yet, especially not if it doesn't get released. Obviously.