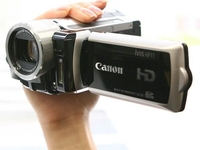 Canon has given the US a sneaky glimpse of two new camcorders that are to enter the Japanese market in August - the HF11 and HG21.

UK consumers will be familiar with the HF11's older brother, the HF10 - an AVCHD camcorder that was launched here in April.

The HF11 continues where the HF10 finished, adding 32GB of internal storage and an SD card slot.

Footage is shot at a fantastic 24Mbps, so quality should be of the highest standard

The second camcorder announced is the HG21. Looks- and features-wise, the HG21 bears a close resemblance to JVC's HD40.

Instead of relying on solid state, The HG21 packs a 120GB hard drive into its frame.

There's no announcement as to whether these camcorders will see the light of day in the UK, but they are set for an August release in Japan, and are priced at 140,000 Yen (£650) each.