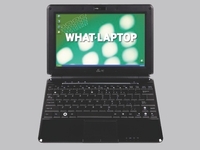 The new Asus EEE PC, the 1000H, has been reviewed for the first time by What Laptop and the reports are pretty positive.

In the burgeoning low-cost laptop market, Asus has firmly established itself as one of the front runners by releasing a slew of cheap thigh-warmers, and its latest addition boasts features to attract even more users to the category.

A new 10-inch screen is a welcome addition, as is the new 'Comfortable' style keyboard, which is apparently around 95 per cent the size of normal letter-tappers.

What Laptop says "We found the keyboard and screen a pleasure to use, especially when working on a train, as you don't feel you need to hunker over the device to get the most out of it."

It sports Windows XP, which makes sense on the 80GB hard drive. Also available is Linux on a 40GB iteration, which comes as a SSD.

The Intel Atom performed well in the test, doing just what it promised and using the fan rarely. What Laptop found the laptop barely got warm at all through use, which is a big plus for regular users.

New mouse buttons also fared well, another gripe sorted from the original EEE 701, so despite the £349 price tag, it begins to look like a pretty solid second laptop purchase.

In summary, the chaps from What Laptop said: "We found this a great choice for those who need something akin to a standard laptop but for the daily commute, the 901 [the cheaper and smaller version] remains the logical choice.

"Whatever your personal answer, there is no denying this is a great Netbook. You won't really want it as your sole machine but as a second device for taking on the daily commute, it's a great choice."