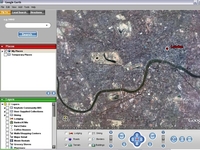 The latest holographic interface being developed over at lm3labs enables computer screens to be displayed in mid-air, and allows users to interact with Google Earth by using their hands.

It's difficult to describe in mere words how awesome the potential for this technology is and, of course, Google Earth is the perfect application to show it off, as anybody who has used Google Earth can immediately grasp the possibilities of holographic interface control.

The tech comes from UbiqWindow and even though it's only a 2D projection, it is still an exciting indicator of the future of the computer-human interface.