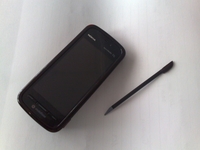 It seems Nokia is playing the 'will it, won't it release a touchscreen handset soon' game better than anyone by giving a sneaky-peek at its iPhone competitor in the new Batman film.

The 'Tube' phone (or the XpressMedia 5800 as it will likely be officially titled) gets around four or five seconds in the Nokia-heavy 'Dark Knight' flick.

Viewers can see Morgan Freeman handing over the key-less device, and seems to confirm Nokia plans to release such a handset soon.

Word is the company is buzzing about the new device internally, though whether it has been showcased long enough on screen to make the public equally as excited will only be seen when it is released.

However with Nokia and its past record with spy shots, that could be anytime from next week until never.