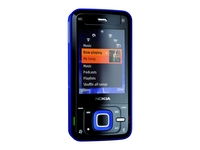 According to the Nokia global site, the company is about to reveal two new handsets to the world.

While pre-launch spy shots aren't uncommon, releasing it slightly early on the company's own website is.

The first is the Nokia 3608, a bog-standard flip phone.

It packs a 1.3MP camera, and dual inner and outer screens. It does have GPS, which is probably by far the most advanced feature and shows how cheap the chips have become.

It also has FM radio capabilities as well as a MicroSD slot for cards up to 4GB.

Non-3G toting, it again is in the mid-to-low range of phones, but still manages dedicated music keys, and 20 hours of playback time on a charge.

A 3,5mm jack is included for your headphones as well as GPS, a 3MP camera and other treats like FM radio.

No word on the important stuff, like pricing or release dates, but you'll know when we do!