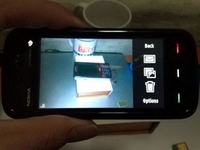 Nokia's 5800, or Tube, touchscreen device has been spotted in the wild once more, this time with a number of photos showing off its prowess.

Although the handset is hardly news, as it seems rumours and prototypes have been spinning around since Noah took two of each animal onto a big wooden boat, the new pictures do show some nice features.

First of all, the necessary stylus could mean the handset is going to operate in different markets to the iPhone. Like the soon to be released Samsung Omnia, this is a high-end smartphone, and likely to require some fiddly touching to use.

However, as the pictures show on digi.tech.qq.com, this phone looks smaller and dinkier than Apple's offering, which may appeal to some users (especially Batman fans after Morgan Freeman showed off the phone for a cameo in 'The Dark Knight').

The model needs to be a big hitter; obviously the device is almost as powerful as an N95, without the camera, and phone-fans the world over have been waiting for Nokia's powerful handset design team to respond to the iPhone.

Fingers crossed the Finns get it right, as nobody wants to see a handset dominate all others!