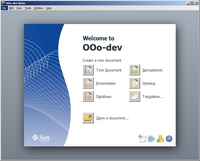 For those that have never dabbled with OpenOffice, its user experience is best described as being akin to Microsoft Office 97 - even more so for the in-development version three - which is no bad thing.

A "standard" toolbar interface is perfect for those wanting a refuge from the Microsoft Ribbon and an equally capable feature set.

Anyone that was hoping for some sort of radical OpenOffice shake-up is going to be disappointed.

The new 'Start Center' is about as radical as it gets and while it is the most visually attractive of the new additions, it's also the least interesting; nothing more than a glorified 'New File' interface.

Thankfully, a host of functional additions accompany the latest builds. One of the most vital is a widening of its file-format support. It has always offered Microsoft Office .doc support relatively well. This has been widened to the new Office 2007 .docx file format, along with Mac Office 2008 file support.

In principle this is great, but in practice we found - even with a quick initial test - that table support was somewhat lacking.

But we'll have to wait for the full release for a final verdict. In the OpenOffice corner is the Open Document Format - something that Microsoft won't support until mid-2009. Both have their pros and cons but frankly the fine details are of more interest to archivists and librarians.

While a Mac version has always been available, version three is now OSX native, so does away with X11, boasting the full Aqua look and feel. A real plus for Apple fans.

The rest of the change log is a series of handy and useful tweaks. The likes of new icons and a zoom control are all welcome.

Writer is now able to view multiple pages of documents on-screen and is actually very handy, as are the new embedded notes.

The spreadsheet Calc has had a couple of power-boosting improvements, such as increased column support - shifted from 256 to 1,024 - workbook sharing, and we were generally glad to see it behaving more as we'd expect.

Of course, Microsoft would be quick to point out that the 2007 Office system can do an awful lot more. Its expansive collaboration tools, features and tight server integration are impeccable and, of course, there's the might of Outlook for consolidated communications, calendar, meetings and tasks. There's also the fact the 2007 suite is fully multi-threaded, while Open Office doesn't seem to be.

But outside of big business are these really important to individuals? The lack of bundled templates and grammar checking do hurt OpenOffice, particularly when you throw in 2007 Microsoft Office system's powerful live previews, powerful SmartArt and its ability to unify design elements across documents.

For the student, home user and small business OpenOffice really wins for its simple convenience.

While Microsoft Office users have to jump through product keys, online validation and WGA checks, just to use their expensive products on a system, OpenOffice will fit on a small flash drive, installs in minutes and is ready to use instantly for an array of different platforms.

That's something Microsoft can't compete with, and in view of the three million visits to the download page in one month alone, there's certainly the demand.

OpenOffice is available for free.