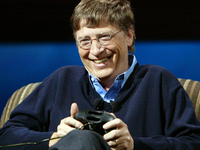 Nobody who matters fears Microsoft anymore.

That, in a nutshell, is where Bill Gates leaves his company after 20 years of being the most feared, most formidable and most powerful driving force in technology.

The company still makes extraordinary amounts of money. But its fortunes always lay in its ownership of the industry-standard operating system, an OS beset on all sides, a power now in relative decline.

But before we get to that, the fact that so many are reading this article on a computer at all is ultimately what Gates will be remembered for. He was there right at the start of the PC revolution and did more than anyone else to popularise the computer. He encouraged people to develop for the PC and so built a huge ecosystem around it.

Whether you use them or not, his tools determine the mainstream and large swathes of the alternatives. Helping to found an entire industry is what will put him in the history books. How long his technological legacy will last is another matter.

While other industry founders, like Intel's Gordon Moore, or Robert Noyce made historic contributions to the integrated circuit, which underlies all modern electronics, Gates made no similar contributions to software design. His achievements have largely been a business ability to spot a technical trend, position Microsoft for it, and then capitalise on the innovations of others. While this gave him a great flexibility, it means he leaves no personal legacy of technical innovation.

The second problem is the test of time. For the first two decades of the PC revolution, there was no doubt it was the only tech game in town. But the trends now are different: a move to open systems and the emergence of the internet as a platform for software development. The PC is only one way of doing personal computing now, and relatively speaking, a declining one at that. While today, the impact of the PC is clear, in just a few years that could change.

The third problem is the greatest: the legacy of clunky software. Bad design. Lack of security. Slow technical progress. There's no reason for any of this: the principles of good software design are well understood. But for years Gates put new features above robust design and Vista-aside, that legacy of insecurity is still with us: in every botnet, in every virus attack, a legacy that will take years to reverse and still leaves us all vulnerable.

Today, Microsoft remains a colossus. Gates's tech influence is pervasive and continuing; the legacy obvious. But tomorrow, who knows? Is the story of computing really the story of the PC, or the story of the network? Will Microsoft ever become a dominant force in AV, mobile phones and so on? Can it rise to the challenge of Google? Will Microsoft Research ever produce a breakthrough on the level of Bell Labs' laser or Xerox's GUI?

And finally, will Gates ever need to make a Steve Jobs-style comeback?