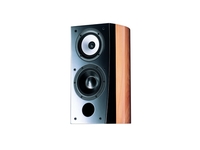 Pioneer has added to its EX speaker range with two new offering that were announced today: the S-4EX bookshelf and S-8EX centre speakers.

The new speakers are, according to Pioneer, the result of over 70 years of superior craftsmanship and experience.

The tweeter diaphragm on the speakers has been improved and is now made of ceramic graphite which apparently can push the diaphragm resonance far beyond the audible range, which results in a cleaner and more accurate sound reproduction.

Both loudspeakers kick out 160 watts of power - which equates to 6 ohms - while the S-8EX range includes two 16cm bass drivers and the S-4EX has just the one 16cm bass driver.

The speakers are housed in a unique cabinet design that provides them with a stable base. Called Pioneer's Precision Curve Design, the enclosure is said to resist the sound generated from within the cabinet to decrease distortion.

Both speakers come in two colours. You have a choice of: beech high-gloss veneer or a dark teak matte finish.

No pricing has been announced but the S-4EX bookshelf and S-8EX centre speaker will be in the shops as of October.