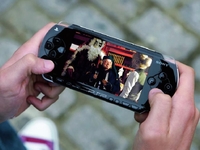 Rumours that Sony is working on a PlayStation-branded phone have resurfaced again, according to recent trade reports.

Marketing Week claims that unnamed industry insider sources in Japan and Korea report that the PlayStation phone will incorporate elements of Sony's PlayStation Portable (PSP) and is being readied for release by Christmas next year (2009).

The same unnamed insiders told Marketing Week that Sony will never consider giving its PlayStation branding to the mobile specialist joint venture Sony Ericsson, as relations between the two companies were 'frosty' following the 'strategic error' of Sony handing over its Walkman branding to Sony Ericsson for use on mobile phones.

Neither of the two companies are currently commenting on rumour or speculation surrounding the proposed PlayStation phone.