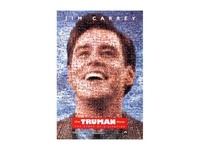 The film The Truman Show is responsible for many things. It launched Jim Carrey's career as 'serious actor', was prophetic in the rise of reality TV shows and their continual intrusion into all aspects of life, and pointed fingers at the growing CCTV culture of the world.

Now psychologists have used the movie's title to coin the name of a new delusion.

According to two psychiatrists from Montreal, there's a new form of mental illness forming in the media saturated YouTube era, where patients believe they are part of their own reality TV series.

The truth about Truman

The illness, though nothing more than heightened paranoia, has been coined The Truman Show delusion by Joel and Ian Gold, the psychiatrists who have written a paper on their findings.

Speaking to the Canadian newspapaer, The National Post, Joe Gold said: "It's really a question of the extent of the delusion."