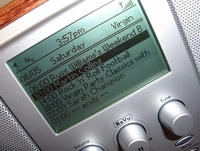 With the TV digital switchover in full swing, plans are being made to move all UK radio stations to digital by 2020.

The Digital Radio Working Group (DRWG) has announced a report that does not state a date but says that the transfer could be complete 12 years from now.

The report suggests that listeners of analogue radio should be given at least two years' notice before the signal is switched off.

Speaking about the report's findings, Chairman of the DRWG Barry Cox said: "At the end of May this year, sales of DAB sets exceeded seven million. We believe radio must have a digital future and that this will benefit both listeners and industry.

"Audiences will be able to enjoy increased functionality and more choice of channels, while the industry will no longer have to sustain the increased transmission costs of broadcasting on multiple platforms."

Currently, DAB can be reached by 90 per cent of the country. To increase this, the DRWG has asked for car manufacturers to install digital radio as-standard in cars. According to the report, the first radio analogue signal to get the chop will be Medium Wave.