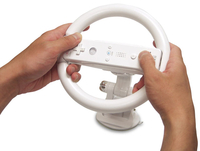 If you don't 'get on' with the free-floating-in-mid-air steering wheel that Nintendo shipped along with Mario Kart earlier this year, then this new Wii steering wheel just released in Japan could well just the ticket.

Available now in Japan for, Japan Trust Technology's "Wii HANDORUKONTORORASUTANDO" is priced at 2,980 yen (around £15).

The rather amusing translation of the product description on Japan's Game Watch site reads: "While playing the game of the handle moved laterally and vertically and is the biggest characteristic. Wii software Mario Kart Wii (Nintendo), Willie motorcycle driving (when driving straight on a tilt steering wheel) is also available.

A suction cup sticks the wheel to your coffee table and the wheel tilts 120-degrees so you can position it however you like and, well, that's it really, away you go.

All you need to do now is to shoot some massive banana skins out of your tailpipe to scupper your opposition as you power-boost your way to victory. You know, like you do in the real world. Like, yeah, right&hellip;