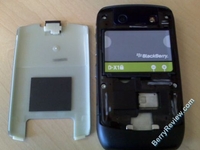 Research in Motion (RIM) seems to be pushing its BlackBerry brand as hard as possible, and new spy shots of the upcoming Javelin seem to hint the 3G-less Bold is on its way.

The Javelin is slated as something of a replacement for the popular Curve, and the pictures hint at the same, with a cosmetic and feature upgrade to keep the fans interested.

The new pictures don't really give away any more clues about the device, which is rumoured to pack GPS, WiFi, a 3.2MP camera, GSM / EDGE quad-band and the 4.6 OS.

However, the chaps over at BerryReview have noticed a change in the connector from mini-USB to Micro-USB, which means some users will be annoyed at having useless chargers following an upgrade.

Still, if you're into EDGE phones that will make web-browsing a bit of a nightmare in WiFi-less zones, then at least the spy pics will keep you content until the thing actually becomes available.