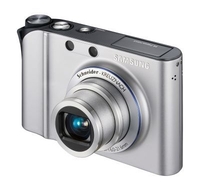 Samsung continues to flood the camera market with the announcement of two new models for its high-end NV range.

The NV100HD is the flagship NV camera, with a whopping 14.7MP sensor packed into its diminutive frame.

This sensor is claimed to be "the world's highest 14.7 megapixel 28mm wide angle lens digital camera". Still not quite sure what that means, but it does sound very impressive, unless the only achievement is they've thrown it up Mount Everest.

As this is a HD cam, there's connectivity in the guise of HDMI and CEC (Consumer Electronics Control), which will "deliver crystal-clear images and movies via a single cable", according to Samsung.

Video can be filmed in 720p (HD Ready) at 30fps and this and your still images can be viewed on the camera's large 3in hVGA LCD screen.

If you want to adjust any of the camera's settings, this can be done through the NV100HD's Smart Touch 2.0 User Interface and Matrix Menu.

Those looking for a bit of style in their camera's will be interested in Samsung's other new NV offering, the NV9.

While it doesn't have quite the imaging power of the NV100HD, the NV9 does play host to a still-impressive 10.2MP sensor, a 2.7in screen and an ISO range of up to 3200 - so low-light shooting shouldn't be a problem.

The NV9 houses features you would expect from a compact - face, smile and blink detection, Beauty Shot mode and a movie mode that lets you shoot footage a 30fps.

A surprising feature on the camera is the inclusion of an MP3 player and a PMP to watch downloaded content.