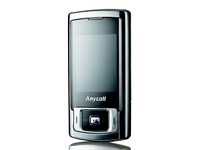 The w510 is made from bio-plastic, using materials from naturalcorn, which is obviously much nicer than dirty petrol-based plastics.

In making the model as well the environment was heavilyconsidered, so no lead, mercury or cadmium was used. The phone has also had awater-soluble coating applied, so we assume it's not a device for the shower.

The other phone on display, the f268, focused more on greenuse rather than eco-friendly construction.

The model does not contain Brominated Flame Retardants,which allegedly can contaminate the environment on disposal, nor does it usePVC.

The s268 also has an alarm to alert the user when the devicehas reached full charge, which surely would be annoying when your phone is puton charge while you sleep. (Everyone does that&hellip;come on, admit it.)

"Samsung is striving to continue to be a strong corporatecitizen that contributes to environmental sustainability," said GeesungChoi, President of Samsung's Telecommunication Business.

"Now we are trying not only to launch moreenvironmentally-conscious products with more renewable material and less energyconsuming, but also to expand proactively set up a phone recycling system."

However, the w510 will be launched in Korea and the f268 in China later this month. Still, goodto see some companies are trying.