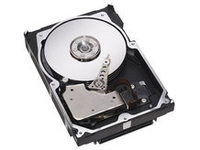 Seagate has announced that it will be releasing a two terabyte hard drive next year, and outlined its planned first foray into the world of solid state drives (SSD).

As one of the biggest names in storage, Seagate’s attitude towards SSD is interesting to watch, and the company has admitted that, although it will start producing the drives for enterprise, the exorbitant prices will mean they do not make them available for the public yet.

"SSDs are not price-competitive yet," Seagate CEO Bill Watkins said. "The storage market is driven by cost-per-gigabyte and though SSDs provide benefits such as power savings, they won't be in laptops in the next few years.

"Low-power consumption capabilities and high speeds make SSDs useful for laptops, but the cost-per-gigabyte won't come down at least for the next few years."

Of more immediate interest to consumers is the 2TB drives that are coming in 2009.

Seagate launched it’s 1TB Barracuda drives last year, and with storage remaining a major factor for many consumers, the idea of 2TB of storage is enticing.