Software developer shows us its plans for Google's Android 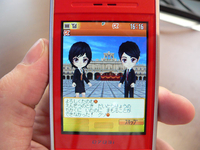 Last month, one look at the work Japanese company Eitarosoft is doing with Android made it pretty obvious a closer inspection was in order - before the fledgling player hits the inaccessible heights of some of its current customers.

So, earlier last week we popped into the firm’s Tokyo office for a chat with founder and CEO Eitaro Nishijima and to take a look at what goes on in a modern software developer.

Dot com all over again?

Initial impressions were thought-provoking – when you come across an expensive, colourful and modern office space that recalls the most conspicuous days of the pre-bubble, dot-com ‘90s it either means the good times are here again for all or somebody’s onto something big.

In the case of Nishijima, it’s clearly the latter. His eponymously named company, founded in Fukuoka in 2002 with just three staff, now has 38 full-timers and a prime spot in the tech Mecca of Akihabara, Tokyo.

Eitarosoft made its name as a provider of rich, 3D games with a strong emphasis on its Java expertise. Aside from that, it also worked closely with Sun Microsystems to develop the 3D engine that powers Project Looking Glass, a notoriously popular (and geeky) cross-platform interface for desktops.

After that came a proof-of-concept demo of a handheld version of the same interface for mobile phones, which was a hit at the 2005 JavaOne conference, and a US patent application covering the same technology.

These days, as evidenced by our conference table covered in phones, Eitarosoft has both feet firmly on the mobile dance floor. And with one billion users of virtual worlds predicted by 2018, who can blame them for seeking a share of the pocket market?

Since 2006, the star in the company’s firmament has been a mobile SNS called Mobage-Town it created for web specialist DeNA, in which users get to interact, create profiles and play various simple games with each other.

Nothing special there, but take a look at the numbers – 10 million active users and upwards of 500 million page views per day. As the company’s Eri Tokita explained, "that’s more than Yahoo’s social networking sites combined," and it tops plenty of the famous heavy hitters in the West.

However, the two-dimensional world of cartoon avatars and the like was only the beginning – the next stage involves lashings of AJAX and an online virtual world called Lamity.

For now, Lamity is a Java application that has to be downloaded to a handset before it can be used, but the just-announced 906i series of phones from NTT DoCoMo come with the app pre-installed after Eitarosoft concluded a deal with makers Sony, Sharp and NEC to load it up at the factory.

With Fujitsu set to jump onboard too in the near future, it’s clear that Lamity will bring its developer bundles of both kudos and cash – each handset maker pays a licence fee to use the software – but what’s the draw when cool stuff like Mobage-Town already has such a hold?

In an attempt to answer that, we took Lamity for a spin with the added frisson of doing so on a new closed-doors version running on the Open Handset Alliance’s Android OS – just about the coolest thing since sliced hype on hot buttered crumpets.

Initial impressions were that the virtual Shibuya (in central Tokyo) we found our little 3D avatar roaming through was awfully like any other virtuality, such as Second Life, but doing so on a phone underlined the difference.

Whereas Second Life will seize up a PC when it has to handle something under 100 users at once, Lamity has no problem at all getting to 400 simultaneous digital bods thanks to AJAX that shifts the processing load from the device to the game server.

Tokita explains: "The server does all the hard work and provides the final images to the user’s phone, which only has to read and display them, with nothing to calculate."

In use, the virtual world is much like anything PC-based, but the emphasis on in-game marketing could be disconcerting for some. The Shibuya arena included a Sapporo building filled with beer-related promotions and campaign ‘staff’ to talk with.

We managed not to take them up on the offer of a free case of beer in return for a little personal data for marketing purposes (insidious, isn’t it?). Fortunately, there’s an age check built-in, although it’s not clear how effective this will be in practice.

Future plans include plenty of 3D games to put the avatars through – we got invited to a networked game of golf – and lots more online shops, where users can spend the Lamity virtual currency, City Coins.

These City Coins, of course, cost real-world money, which appears as a hit on the following month’s phone bill – a world first for any mobile virtuality.

All of which adds up to a potentially hectic virtual existence that’s at least as trying as real life. Still, as Tokita says, it beats Second Life et al, where there’s "really nothing to do."

After that, Eitarosoft plans to link up as many social sites as possible with Lamity using Google’s OpenSocial, so the implications for an immersive 3D mobile blanket over everything from MySpace to, possibly, Facebook are obvious. As CEO Nishijima pointed out, "Your phone’s always with you, after all."

Lastly, whether deliberately or not, Tokita also let slip that showing Lamity at a Tokyo trade fair last week drew the attention of some seriously major-league players, including IBM.

As we already know, T-Mobile is going to be feeding the software to its customers on real Android phones later this year.

With admirers like that, it’s clear the only way is up for a company like Eitarosoft and that other applications for Lamity are just a smart negotiation away.

Whatever turns up, look out for Eitarosoft’s cutting-edge programming on a phone near you soon. Just remember not to sign up for the free beer, ok?