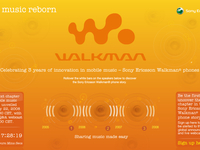 Sony Ericsson is sliding in the worldwide popularity polls as a manufacturer; the statistics prove as such.

But that hasn't stopped it releasing a large number of phones last month, and now more are likely to appear on the scene following a big hype push on the site.

Come July 22nd, SE is planning a big surprise, according to its mysterious website, which states:

"It is now almost 3 years to the date since Sony Ericsson re-invented how people listened to music on the move by launching the first Walkman phone."

"On July 22nd Sony Ericsson will reveal the next chapter in the Walkman phone story."

OH MY GOD how exciting. It couldn't be the new Remi, Feng, Alicia, W595 and W902 handsets, spyshots of which have already been leaked out into the wild, could it??

For those of you who really can't wait and don't want to miss a thing, there's a countdown on the website to the 10AM CET launch.

There will also be a live webcast with interactive Q&A functions, so you can ask why Sony Ericsson hasn't brought out an iPhone wannabe too.