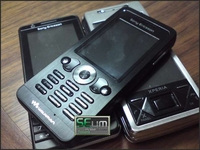 Sony Ericsson - you can't say it's accepting its falling ranking in the mobile manufacturing stakes easily. Instead, it decides to have two days within a month of each other when it will release approximately a million handsets.

The new Feng (or W302 to give it its proper title) will be a mid- to low-end camera phone, designed for those who want a stylish-looking device but don't give a jot about functionality.

Bearing more than a passing resemblance to the W880, which is now a year old (you remember&hellip;thin as a CD case? Had those funny buttons? Ah yes, it's all coming back now) the Feng packs some pretty similar specs too.

In fact, they're more along the identical lines. Both have a 2MP camera without any extras like autofocus or flash. There's no sign of expandable memory with the Feng, though a Walkman phone without it pretty rare so it may just be the photos obscuring it.

Both have a similar form factor, with similar screens. In fact, you have to question what Sony Ericsson is doing releasing the same phone again.

To be fair, the W880 was a pretty high end device last year, with a grand marketing scheme behind it to get things going. The Feng is likely to be pretty cheap, and may just be a slightly re-badged version of its older brother.

Expect it to be announced on July 22nd, and you can have it in your hands around October.