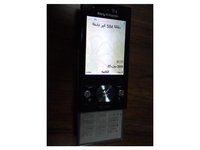 As if right on cue, another clue to the possible release of new phones from Sony Ericsson has emerged in the shape of the G705.

The Sony Ericsson BeiBei phone, which we brought you news of back in May, has been shelved permanently it seems, but this hasn't stopped the G-series from development.

So, the G705. SE has got a bit of a thing for equality among handsets, so a slider seems fair, given the Remi is likely to be a candybar device.

A 3.2MP camera with HSDPA connection, 262K colours on a 2.4 inch screen, and the mandatory GPS, which every phone seems to have these days (probably due to the low cost of the chips along with the ease of installing).

WiFi is also tipped for inclusion, according to the Unofficial Sony Ericsson Blog, on a handset that could debut in mid-August.

The problem Sony Ericsson has at the moment is one of differentiation from the market. Once a proud pioneer in the mobile world, SE has only incrementally changed its handsets over the years, presenting solid rather than spectacular progress.

This has allowed the likes of Samsung and LG to come in with some novel handsets, making use of rapidly advancing touchscreen technology, appealing to the fast growing worldwide market.

The G705 will likely do OK over in the UK and some parts of Europe, where SE still has a fairly strong market hold, but unless the R&D department gets it hat on and helps halt the sliding profits, the Swedish Japanese joint venture could soon be nothing but a memory.