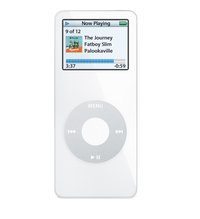 Move over PSP and DS, the iPod is being taken seriously as a games device - with Square Enix set to bring out a role playing game for Apple's music player.

Built to work with iPod Nanos, iPod classics and fifth generation iPods, Square Enix - the Japanese powerhouse behind the Fnial Fantasy games - has come up with an RPG.

Somewhat amusingly the game reportedly decides on your in-game stats and abilities by using the songs on your iPod - paving the way for suicidal goth emo characters for an entire generation.

Square Enix are by no means the first gaming studio to pitch their wares for the iPod, with the likes of Electronic Arts and Sega already producing games.

Indeed, another of Apple's devices, the iPhone's capacity as a gaming platform is yet to be fully explored, but the rise of casual gaming and the increased power of convergent devices does appear to be heralding a new era of portable play.