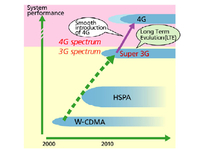 When we recently tipped you the nod from inside NTT DoCoMo that the Japanese mobile carrier would be ready to roll out next-generation networks by the end of next year, we didn't expect the proof to be quite so forthcoming.

Still, the evidence that Super 3G is on track is now public, after a full-scale demonstration in Tokyo this week.

To compare that to fixed connections, the average domestic fibre connection in Japan is rated at 100Mbit/s both ways, while DSL in countries like the UK languishes far behind at around 3Mbit/s.

DoCoMo says it will start building its Super 3G network in late 2009, meaning - thanks to the fact that it only needs to upgrade the software powering its existing 3G service - that 2010 likely marks the start of the LTE era.