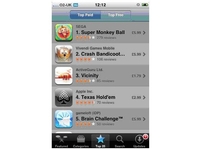 We've been loading our iPod touch and iPhones up with every App going since the launch last week and are delighted to report that Apple's latest foray into ease of use and empowering the everyman, is a huge success. With most Apps available for free, the price of an iPod Touch, or even the more costly iPhone is at last looking like a bargain.

The Apps themselves seem to split into one of three categories: fun diversions that show off your iPhone (see iPint and BubbleWrap), stripped down pocket re-interpretations of existing software (see Super Monkey Ball) or bizarre technology 'voodoo' that appear to perform the impossible (see Midomi or Last FM). Here's our top 15 must-loads.

Sing into Midomi, hold it in front of a speaker, or just speak the name of a track and Midomi can identify artist and title and take you to iTunes and YouTube to hear it in full.

While similar app Shazam that has stolen the limelight on this front, our money is on Midomi as a better all round solution. It looks better and the ability to hum or speak a tune (missing from Shazam) makes up for its slightly smaller database and more scattergun results list.

Plus those instant buttons to buy or view the track found take it to the next level.

Possibly the most powerful and amazing app of all (yes, even more than iPint - below) this simple web newsreader is worth the asking price of a iPhone or iPod touch alone. It simply retasks and redisplays the stories filed by the Associated Press.

The app itself is tiny and simple but the content is unfathomably deep and massively useful. Buttons for 'sport' and 'showbiz' etc bring up the very latest stories in seconds, then click through the headings for (literally) instant access to the full story with pics and video. It's very US-centric but the ability to filter by continent brings up a list of less baseball-focussed entries. This one is a must.

There are countless voice recorders on the Apps Store with price tags from the bargain to the ridiculous. But why pay for one at all when VoiceNotes is free and just works. Hit record and record direct to your iPhone or iPod touch's memory. Name your clips and listen to them back in the app. It works, it's free, it's great.

An amazing piece of web-trickery that puts all the amazing 'listen for free' fun of the lastfm.com website on your phone. You can literally listen to any song in the world, instantly and for free.

Last FM's main sell is that it can create 'radio stations' based on what you listen to and serve up similar tracks. But it's the fact that you can search for and (by and large) find and hear any track you want that's the real power behind the throne. OK, bit rates can be a bit low for real hi-fi snobs, but who's complaining?

First there was iBeer, a virtual pint of frothing American beer that you could tip up, 'drink' and shake about, that cost you a couple of quid. Then, soon afterwards, there was iPint - a blatant rip-off, rebranded with the word 'CARLING' stamped on the glass but given away for free.

It lacks the 'frothing' and 'tip a pint from iPhone to iPhone) features but included a simple 'slide the pint down the bar' game instead. Which is rubbish. Despite this, of all the Apps this is the one that will impress (drunken) mates down the pub.

Now this is getting silly. Press the screen and pop the bubbles. Lacking the tactile fun of the stress-relieving real thing, it's nevertheless a brilliantly simple and fun idea.

Yes, it works. Not much else to say about the famous Sega game of chimps trapped in balls except that it's exactly as you would imagine - and that includes an insane level of sensitivity that will thwart and annoy anyone remotely ham-fisted.

Roll the chimp along the 3D maze to the end of increasingly tough tracks. Why are the chimps trapped in balls? Why are they on mazes? Why are you asking such stupid questions, just buy it!

No, wait. We know that you don't care about share prices but we can't get enough of graphs and stats - especially ones you can zoom around and magnify with your fingertips. Even if your portfolio is bare we implore you to get fascinated by this superbly powerful and expertly designed App that can bring up facts and figures on any stock anywhere in the world.

Flip the phone on its side and slide through figures from the last month, week, year etc. Press on the graph for a laser accurate readout of price at any specific time. Then buy shares in Jamaican Zinc and retire on the proceeds. Good luck!

A bizarre but brilliant combination of Tetris-like block stacking and character-driven RPG. Power up your character and gain ever increasing block-smashing skills.

Looks fantastic, works like a charm and really ought not to be given away for free. (Though this is apparently the start of a MMO series so expect 'part two' to come at a small fee.) Still, for now, this remains one of the best games on the Apps Store - and it's free!

Now this is magic. A simple (free) talking phrasebook for anyone trapped in foreign climes with a desire to say 'You Have Lovely Eyes' in a variety of languages. Or rather have your 'Pod or 'Phone say it for you. Tap through a series of menus, (travel, accommodation, shopping, etc) to hone down what you want to say then tap on the final phrase of choice to hear it out loud.

It's stunningly simple to use and works superbly. Still no word on quite how you're supposed to understand what they reply though.

Bore friends at nightclubs by reporting the exact BPM of the tune being played. Or - if you're a music maker yourself - thrill to the precise readout of half, quarter and eighth note millisecond-timings ready for keying into your digital delay. Functional AND cool.

There are countless blogging tools out there (special mention to market leader Typepad and it's free - for now - App that works just fine) but we love the simplicity of Cloudy, a blog tool that lets you take photos on your iPhone and post them on-line for others to see.

It couldn't be easier to use and the added bonus of browsing other peoples pics (and even filtering them by your current position) makes it a brilliant way to while away the hours.

A brilliantly designed interpretation of the famous online networking phenomenon that has taken more than a few leaves out of Facebook's er&hellip; book. Much of the complexity and versatility to customize MySpace has been ripped out of this portable version and in its place remains a tight, easy to use focus on messaging and sharing words and pictures.

If you were beginning to loathe MySpace's never ending mess of menus and options then this streamlined App is for you.

With the current mapping apps focussing entirely on the US (there are now a million ways to find your nearest Shi-Atsu massage in Chicago&hellip;) this simple, stripped-down and fun 'mapper' gets our vote.

Most nav Apps merely copy (or act as front ends to) the already great Google Maps feature included by Apple. G-Spot cuts the crap and gives you a fun, radar-scanner-style readout that will send your location to similarly equipped friends and let them spot and find you.

OK, so it's early doors for this potential 'friend-making' location app but if enough people get on board it could be massive. Basically you feed it information about yourself (likes and dislikes etc) and, while you shop, dance or cut your toenails it beams them out into the world for similarly specced, nearby copies of iFob to find.

That gorgeous, auburn-haired James Joyce fan (with the body to die for) knows where you are and is getting closer every second! Or maybe you've just given away your address and the fact you're out for the day&hellip;