The complete guide to Freesat 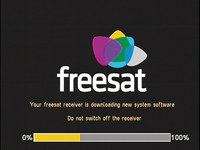 A free satellite service has long been recognised as a way of filling the gaps in Freeview's coverage that didn't force viewers to sign up to Sky, but it's taken a long time to go from dream to reality.

The road to Freesat started five years ago, when the BBC abandoned encryption on its satellite broadcasts, but it was another two years before ITV followed suit. In September 2005 the two announced that Freesat would launch about six months later, and it then went very quiet until last year.

The successful trial of high-definition TV on Freeview in late 2006 seemed to bring the free-to-air broadcasters together again, and there were rumours that Channel 4 would be able to leave the Sky umbrella. A launch date of spring 2008 was announced, followed by several equipment manufacturers committing to the cause.

We knew that it would have an EPG and interactive TV software based on the same MHEG-5 system used by Freeview, it would have Freeview Playback-style recording functions, and HD channels.

Otherwise, facts remained hard to track down, with rumours that the partners couldn't agree on a technical specification, so the receivers wouldn't be developed in time. As the clocked ticked down it was still very unclear whether any of Channel 4's digital family would be able to join, or even if there would be any products to put in the shops.

Cost options Freesat finally came to life on May 6. Three manufacturers remain on board, but at least Channel 4 has broken free, even if Five remains shackled to Sky So after all this anticipation, how does the UK's independent satellite TV platform compare to Freeview, and to its pay-TV rivals?

Freesat's key selling point is that there's no contract or subscription, just the cost of the set-top box and installation. Unlike Freesat from Sky, which has a set £150 cost and delivers a standard Digibox with a single-room installation, there are a range of Freesat receivers and installation options depending on which retailer you visit.

It's initially available online and in-store from Argos, John Lewis, Currys Digital and Comet but throughout the summer a number of independent electrical retailers will also be licensed to sell Freesat.

Freesat is available to 98 per cent of UK homes, using a standard 45cm minidish.

It broadcasts from the same group of Astra 2 satellites used by Sky, at 28 degrees East, so if you already have a Sky minidish you won't need a new one, although you may need to upgrade the LNB if you do not have any spare feeds from the dish.

The BBC, ITV and Channel 4 signals are all broadcast from Astra 2D, which has a smaller footprint than the other Astra 2 satellites, and these will require a larger dish to receive outside the UK.

BBC HD is on air now, with a prime-time schedule that will expand over the next few years into the afternoon. The BBC's hi-def services are broadcast in 1080i with Dolby Digital 5.1 surround audio.

ITV doesn't have any hi-def programmes as yet and its first access to HD will come in August, when it starts showing Premiership highlights, UEFA Champions' League and England matches. ITV won't confirm if there will be any non-sport hi-def shows, although Freesat's marketing features both the ill-named Britain's Got Talent and Primeval.

Instead of launching a whole channel for HD, ITV will use a red-button application, so users with an HD box can switch to the hi-def stream when it's available. This also means that ITV HD will be exclusive to Freesat for some time, although Sky has said it's keen to have access for Sky HD owners.

Channel 4 HD has no plans to join Freesat while it's still at an experimental stage, and Five doesn't have an HD channel.

HD set-top boxes are available from Goodmans, Bush, Grundig and Humax now. Humax will launch a twin-tuner HD PVR 'in the next couple of months'. The Humax HD PVR will be able to record ITV's HD events.

There are special 'Freesat extensions' to MHEG which allow richer services that can take advantage of the extra bandwidth on satellite and the greater processing power of today's set-top boxes.

The BBCi service has been completely re-written on Freesat and is significantly faster than the same service on Freeview.

Every Freesat box has an Ethernet port which can be connected to your home broadband connection to allow high-capacity return path for interactive services. This is likely to include versions of the BBC iPlayer and the forthcoming Kangaroo service, so you can access on- demand TV from your set-top box.

The BBC wants iPlayer be available by the end of this year, while Kangaroo could take longer to arrive. It's possible that other free or pay-TV services may want to be available via the Ethernet port, although that would bring Freesat's key selling point into doubt.

There are seven receivers available now, and a second wave of manufacturers is expected to join Freesat by early 2009. All receivers have to meet a minimum standard specification and must pass stringent DTG Testing.

The Freesat EPG and interactive services will only function on Freesat-badged receivers. They cannot be picked up using a Sky Digibox or free-to-air receivers which don't carry the Freesat badge, although Sky has its own EPG and interactive technology. Some manufacturers may choose to upgrade their firmware to meet Freesat specifications, but without an Ethernet port they will not be able to carry the Freesat badge

One surprising omission is support for channel- stacking LNBs, which can supply several tuners or receivers through a single cable from the dish, making PVR and multi-room installations far less expensive. There appears be some support for these in the Humax receiver, so it may be added more widely as a future software upgrade.

PVR: There are no plans for a standard-definition PVR, but Humax expects to launch a hi-def PVR in July or August, retailing for around £150. Hard disc capacity will be at least 320GB. Other manufacturers are expected to supply PVRs in the second wave.

Integrated hi-def TVs: Panasonic will launch two plasma TVs (42in TH-42PZ81 and 46in TH-46PZ81) with integrated Freesat and Freeview tuners by the end of June, with a third (50in TH-50PZ81) in July. They will be joined by two LCDs (32in and 37in) in October, also with both Freesat HD and Freeview tuners. Freesat IDTVs are expected to cost around £200 more than their Freeview siblings.

The plasma range are all 1080p Full HD-capable, with an SD card reader offering MPEG-4 HD playback, optical digital audio out, and HDMI out with Enhanced Viera Link, although you cannot record HD to a suitable Panasonic recorder. They have a total of three HDMI connectors.

Standard installation costs £80 for a dish with a single- output LNB and up to 30m of cable, but other options will be available at different retailers: Argos will only offer the standard installation in-store, but you'll be able to talk through the options with the installer before they visit.

Comet, Currys and John Lewis stores will offer a menu of options for PVR (or PVR-ready) systems, or multi-room installations. These will be £120 for two rooms, £160 for three rooms and £190 for four rooms from Comet or Currys, while John Lewis will charge £120 for a two-room installation and will calculate other prices on a case-by- case basis with the customer in-store.

Freesat is great news for anyone who wants to get free digital TV, particularly if you can't get Freeview or you want to watch BBC HD this decade. It's technically better than Freeview and the potential to add iPlayer is very exciting.

It's a shame there's no PVR for the launch, but a greater long-term problem is the difference between Freesat and Freeview's channels lists, which is sure to cause disappointment and frustration to a great many viewers.