If you feel like your old compact camera is no longer doing the job you want, it might be time to make the step up to a DSLR.
Generally speaking, they're far better cameras than compacts - but that extra quality comes at a price.
Digital SLRs offer a whole new way of shooting compared to compact cameras. They give you a lot more freedom in the way you photograph.
The most noticeable thing about a DSLR is the ability to change the lens for versatility over composition. A host of settings such as shutter speed, aperture and focusing can also be manually adjusted for complete creativity.
The digital SLRs in this round-up start at £300 and go as high as ten times that. With that in mind, there's something for everyone here.
*
Sony A200 - £300
* 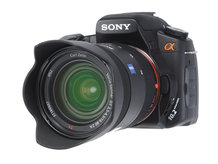 Of Sony's range of DSLR cameras, the A200 is certainly the most modestly priced.
It's also stunningly good value at £300 - which is £150 cheaper than when it launched.
For a 10-megapixel DSLR with so many features, you could be forgiven for being a little suspicious, infact.
But the camera largely stands up as a good entry level product. Sure the 18-70mm kit lens is distinctly non-phenomenal, but that's the beauty of DSLRs - you can buy new lenses after you've bought the body of the camera.
If you were to do just that - you will find the A200 standing up to be counted amongst cameras with much higher retail prices.
Overall, the A200 is a pretty decent camera, but it falls down in a number of areas which is a shame.
The standard lens isn't good enough, the control layout's not quite straightforward enough, and the finish isn't quite elegant enough.
However, for a newcomer to the digital SLR market, you could do a lot worse than the Sony A200. It offers great value, a beautiful LCD display and plenty of extra features. Read our full review
*
Nikon D60 - £400
* 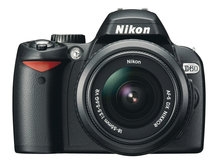