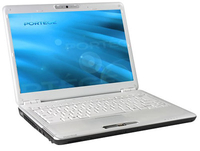 Toshiba has announced an updated range of Satellite and Satellite Pro laptops that utilise Centrino 2 technology.

And it's not just the Satelitte lappies that have been given new intel chips, either. Toshiba's sleek and stylish Portégé M800 also houses a Centrino 2 chip and is out now in a limited edition 'white pearl' design.

And lastly we come to the company's Qosmio range. And you've guessed it; the laptops have Intel Centrino 2 inside.

The F50 and G50 models are available now, with pricing for the series starting at £899.

The X300 model, the company's latest gaming machine, houses Intel Core2 Duo Extreme processors, up to 4GB of DDR3 RAM and dual hard disk drives with capacity of up to 640GB. There's also the welcomed inclusion of an nVIDIA GeForce graphics and a 5.1 channel Harmon Kardon sound system. The price for this laptop begins at £1,199.