Toyota to build solar panels into next year's Prius 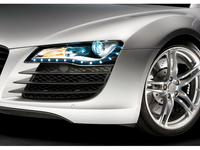 On a busy day for news of all things solar-powered, Toyota in Japan has announced that it will be selling hybrid cars complete with solar panels on the roof.

From next year, Prius models will have the solar cells as an option, although they won't be capable of powering anything more than part of the air-conditioning system.

In fact, an anonymous source within the company told Reuters that, "It's more of a symbolic gesture... it's very difficult to power much more than that with solar energy."

Nevertheless, the move is likely to bring more sales of the constantly sold-out Prius, as well as to draw attention to the petrol/electric hybrid car at a time of spiralling fuel prices.