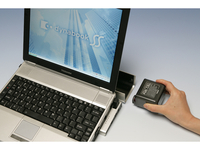 When it comes to new technologies, using them and just admiring them are two very different things. For example, we all love the idea of a fuel-cell-powered phone, but are we really ready to carry flammable liquids in our pockets?

Over in Japan, the national broadcaster, NHK, has put its convictions on the line by using fuel cells to power live broadcast equipment at the ongoing G8 summit there.

The direct methanol fuel cell (DMFC) used by an NHK TV crew is the first cell powerful enough to drive large-scale equipment, yet light enough to be portable.

Running on half a litre of 40 per cent methanol, the Hitachi-built DMFC can supply 100W of electricity for two and a half hours and can recharge camera battery packs at the same time.

At just 6kg, it is more than 4kg lighter than the standard generators NHK typically uses in the field.

Although methanol does not reduce carbon dioxide emissions, it is seen as a step towards cleaner hydrogen fuel cells.

The Hokkaido trial has the DMFC powering just lighting equipment, but the fact that it's being used in live broadcasts shows the level of trust NHK has placed in it.

Previous trials had the cell supplying electricity to non-critical parts of the broadcast set-up, such as monitors.

That lighting equipment comes in the form of LED lamps made together with Toshiba. These use only one third of the power standard TV tungsten lamps require, but are just as bright.

The lamps also run cooler, meaning their use in studios cuts the demand for air conditioning there and, thus, contributes to yet more power saving.