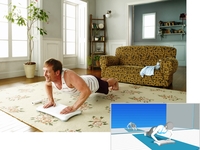 We already know that a bit of tweaking will allow PCs to run Mac OS X, but how about a USB dongle that lets any old system boot up the Apple OS?

Mystery firm EFiX is offering a USB device that, apparently, allows users of Intel-powered PCs to run OS X without needing to be hands-dirty geeks.

The company's website says, "[EFiX] allows the user to install Mac OS X straight from the original DVD without having to worry about patches, replacing files and anything like that."

It sounds great, but not only is the site currently down most of the time, it also lacks any pricing information or any way to order. Perhaps it would be best to steer clear for now and let someone else do the spadework, eh?

Far more believable, on the other hand, is the revelation that the tremendously tedious Wii Fit is not just a snooze fest and is actually useful exercise.

The upshot was that he lost 15lbs in 41 days - evidence for which is in plain sight on his website, along with some very interesting snippets about Nintendo's distinctly bi-polar attitude towards hardcore fans like him.

Lastly for this morning, New Scientist has a couple of video clips of CCTV software that protects the privacy of people unwittingly caught on security cameras - most of us, in other words.

One of the technologies, from US company 3VR, blurs out faces but can unmask them is the person they're attached to is judged to be acting suspiciously.

The other, from Emital in Switzerland, does the same for people and cars captured by the cameras. Both firms are clearly hoping for a slice of the market that is sure to develop as more people voice concerns about surveillance.