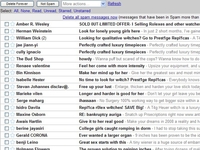 Remember a few days ago when we brought you news of tests showing that solid-state drives aren't as power-efficient as we were led to believe?

As might be expected, SSD makers have hit back at the methodology used by the Tom's Hardware website, claiming they tested the wrong kind of kit.

One spokesman for an SSD vendor said, "They are using legacy drives, none of which will be used by any major PC OEM."

In other words, the very newest SSDs should perform as advertised, he claims. With new drives expected soon from Intel, among others, the SSD field is clearly heating up.

While we're on the subject of Chipzilla, Intel has revealed that it is looking to make chips using 10-nanometre processes within a few years.

The current smallest chips have connections measuring 45nm - these will be followed by 32nm next year and, possibly, 10nm or below around 2012.

Smaller parts means more energy-efficient systems and greater processing power per chip; clearly desirable attributes that are driving Intel and others to innovate as quickly as possible.

Finally for this morning, anyone still unsure about just how bad the spam problem is should take a close look at an experiment run by McAfee in which participants responded to all junk mail to see what would actually happen.

Instead of deleting obvious spam, trialists who clicked the fake 'remove me' links or otherwise responded ended up with not just more spam but real, paper junk mail too.

In just one month UK testers managed to attract around 10,000 unwanted messages, but those in the US averaged a horrifying 23,000 in the same period.