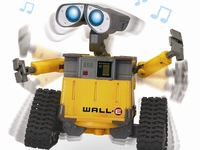 Disney isn't shy when it comes movie tie-ins and the studio's latest projected smash WALL-E brings with it a whole host of branded tech toys including a dancing iPod dock and a low-cost remote control robot.

WALL-W which deals with the robot left behind and alone on Earth to clean things up is out next week, and you could have your own version of the protagonist.

First up is the U-Command WALL-E, a remote control 'robot' that can turn around on the spot, 'move in every direction' (apart from upwards or through the floor presumably) and 'even do a figure of 8'(!). All for 39.99 from Tesco

For the more musical amongst you, the iDance WALL-E 'dances in a funky, bio-robotic style to any music source' when you jack in an audio source like an iPod or an MP3 player to play musc through his chest speaker.

He also features light-up eyes and sound activation and is available from Argos, Smyths and Toymaster for just under 20 quid.

That might even be worth it just to find out what the hell 'funky, bio robotic style' actually looks like