Warner Music no longer on Last.fm 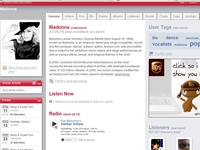 The station, which was acquired by CBS interactive just overa year ago for the princely sum of $280 million (£142 million), *has stopped users listening to single trackson the website that belong to Warner.

Now if you search and click on them, allyou get is a ‘This isn’t yet available to play on Last.fm’ message, much likethe one YouTube posts when copyrighted content has been taken off.

A statement released by Last.fm says that the service is "currently negotiating a new agreement withWarner Music Group."

Before WMG’s music was pulled from the site it has been reportedthat the contract between the internet radio station and the record label wason a month-by-month basis.

According to Billboard, one of the reasons WMG hasrequested that its music be removed is because the company has become "disenchantedwith Last.fm's compensation rates" and "has been frustrated byLast.fm's failure to proceed with its plans to launch a music subscriptionservice."

For users of Last.fm, it means that bands like Led Zepellin,REM and Madonna will no longer be available for listening on an on-demandservice. The site will, however, be able to play Warner artists through itsinternet radio station, as this is on a separate contractual basis. *