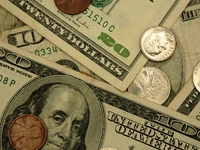 A loophole in Microsoft's new Live Search Cashback program has left some eBay users coughing up $714 for $630 in cash.

Paying more than something is worth isn't, traditionally, a sensible way to boost your bank balance.

But thanks to last month's desperate attempt by Microsoft to prize some market share away from Google, there could now be an exception to the rule.

Microsoft's cash-back scheme bribes users to use its Live Search ads, promising cash-back of up to 35 per cent of the purchase price of certain products, if they are bought as a result of the search.

So for Bay listings offering cash, both seller and buyer theoretically stand to make some extra money - providing the listings are 'Buy Now' purchases and payments are made using PayPal.

It remains to be seen whether or not attempts for free money such as these will work; Microsoft, eBay and the eBayer have all so far declined to respond to requests for comment. We'll keep you posted. http://www.theregister.co.uk/2008/06/19/ebayer_live_search_game.

Google Earth and Facebook hit the news as well this week, with Devon and Cornwall police warning of a new "dipping" phenomenon sweeping the region.

Hordes of British teenagers have apparently been using internet satellite images to identify nearby homes with swimming pools, using Facebook to spread the word before turning up uninvited for late-night dips.

The crazy kids often wear fancy dress and are told to "bring a bike" so that they can make a quick escape, the Daily Telegraph reported on Thursday http://www.telegraph.co.uk/news/uknews/2146807/Facebook-'dipping'-craze-irks-pool-owners.html.

Police fear that the fad could spread across the UK as the summer approaches and increasing numbers of pool owners leave their homes unattended while on holiday.

And in other news, the world's most successful TV hijacker, Italian telly prankster and condom advocate Gabriele Paolin, has been threatened with a jail sentence by Italy's Supreme Court unless he behaves.

So fed up are officials with Mr Paolini's 20,000-plus broadcasting interruptions, that the Court has outlawed the act of deliberately getting yourself on TV, even if you're silent and immobile, the BBC reported on Wednesday http://news.bbc.co.uk/1/hi/world/europe/country_profiles/7456040.stm

So watch out for background TV reporters if you're holidaying in Italy&hellip;

A woman from Weston-super-(night)Mare got more than she bargained for when she attempted a simple fluff-removal procedure from a defiant tumble dryer in her own home.

Firemen were called to the scene after the woman found that her hand had become wedged "between two pieces of moulded plastic", according to the BBC http://news.bbc.co.uk/1/hi/england/somerset/7459138.stm

She was eventually freed after an analgesic gel was employed by firefighters to numb the pain before cutting her free using a saw and tin snippers.