What does the iPhone 3G mean for Blackberry? 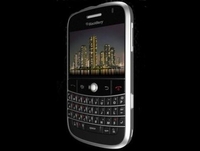 A big chunk of Steve Jobs’ WWDC 2008 keynote yesterday was given over to the enterprise features of the iPhone 2.0 firmware.

That poses a direct challenge to smartphone makers like RIM, the company behind the business-focused Blackberry.

iPhone features showed off during the keynote include push email (Blackberry’s home turf) and support for Microsoft Exchange 2007 - making it a great alternative to businesses who’re bored of the current incumbents.

RIM, of course, is moving in the opposite direction. With the launch of the Blackberry Bold 9000 in May, it’s finally moving out of the cloistered corridors of enterprise towards a more consumer-oriented future.

You only have to examine the Blackberry Bold’s high-class design, 480 x 320 pixel colour display and support for iTunes using Blackberry Media Sync to see how true that is.

And then there's the Blackberry Thunder - an iPhone rival with a rumoured full-face display instead of the screen-and-physical-keyboard combo we've been used to with Blackberry devices to date.

Of the two platforms, the Blackberry still very much has the edge for business users. It offers wider push email access than the iPhone, with support for IBM Lotus Domino and Novell Groupware as well as Microsoft Exchange.

The Blackberry also includes Instant Messaging - something the iPhone can’t yet do, despite iChat’s inclusion in OS X on the Mac.

All Blackberries, of course, are also compatible with thousands of third-party applications aimed at business users, the Apple iPhone has hardly got started.

Spec for spec, the iPhone and Blackberry Bold 9000 are more or less par - both offer Wi-Fi , GPS and 3G (the Bold is the first Blackberry model to do so).

The iPhone 3G beats the Bold hands-down when it comes to on-board storage though: you get a choice of either 8GB or 16GB on the iPhone; the Blackberry Bold holds 1GB, plus a side-mounted SD card slot.

The decider for many corporate types of course will be what their company chooses to give them. Businesses are still more likely to pick a Blackberry for their employees,* but it’s the iPhone that many of us would buy given a choice.

In truth, the iPhone 3G and the Blackberry very distinct platforms that can easily find room to manoeuvre in the rapidly growing smartphone space.

If anything the iPhone and Blackberry pose more of a threat to Windows Mobile, Palm and Symbian platforms than they do to each other. We expect both to clean up in the coming months.