Which iPhone will land? 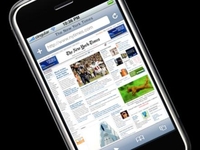 Techradar has been looking extensively at the approaching keynote from a certain Mr Jobs, and although it might be a dangerous practice usually, we’ll go as far as saying there will be an announcement regarding the next-gen iPhone.

But which version will land? Will it have GPS, a 10 megapixel camera and the ability to discover life on Mars? Or will it be nothing more than the addition of a 3G and an 'on and off' switch in the menu?

Here’s a selection of the top predictions on the forthcoming launch:

Let’s be honest, it’s going to be a let down after all the hype. 3G support will be there, as will haptic feedback and GPS, as well as some great integration with the new Apps store.

Don’t forget the new iteration is also billed as the ‘business iPhone’ thanks to the Microsoft ActiveSync capability, so expect a more powerful email program too.

But ultimately, it won’t be much better than the iPhone we see today - I just hope the Apple team have worked out a way to sort out the battery life issues, as the extra features are going to need some improvements in the power supply.

To be honest the 3G aspect of the new iPhone doesn’t really interest me that much – but then again I live and work in central London where Wi-Fi is becoming ubiquitous. On those occasional times that I venture beyond Zone 3, I may well be glad it has 3G.

For me it’s more about the affordable price, the handy work things such as the push-email features (I never really ‘got on’ with BlackBerry’s awkward QWERTY keyboard) and the fun things I can do with it – such as fiddling with Google Maps on the bus and looking forward to playing forthcoming games like SEGA’s Super Monkey Ball and Will Wright’s Spore.

Is mobile gaming finally becoming something to bother with? I hope so. It will save me having to bundle a DS into my bag whenever I leave the house.

Like everybody else, I predict Jobs will announce the 3G iPhone, but I don't think it will hit stores yet - especially in the UK. But what Apple-logic tells me is the iPhone has never been a logical Apple product.

There's an obvious counter argument to this. The iPhone simply hasn't sold so well in territories like the UK simply because of its lack of 3G loveliness.

*So could the company be about to harpoon the early adopters? Probably.

But the sweeter of the iPhone 2.0 firmware means an original iPhone will just be a bit of a slower version of the newer one. And I don't expect O2 to offer unlimited 3G data as it does on the 2G version. Mind you, if it does, the others might as well pack up and go home.

Even though I think we’re all going to be mightily disappointed with the announcement – nothing can measure up to this amount of exposure and speculation – the new iPhone should have some nifty features that will make it more desirable to the average consumer and not just first-adopters.

These should include: 3G, GPS, a better camera and a slimmer chassis (or the same chassis with a bigger battery). Other than that, unless Steve Jobs lays all his cards on the table (which he rarely does), we’ll just have to make do with a few tweaks here and there.

Oh, just one more thing: don’t expect the iPhone to be the only ‘big’ thing announced. The rumour mill has primed this year’s WWDC up to be a bit of a double whammy.

This could be the much-feted MacTablet or even an overhaul of iTunes to accommodate the new App Store.

Apple will certainly announce the 3G iPhone during the keynote, it's likely that we see two models, one entry-level and one high-end with more storage and features.

Mac OS X is also expected to see a major update code-named 'Snow Leopard', this has been confirmed by our own sources. There has also been a lot of waiting for the Cinema Displays, which haven't been updated since 2004.

Today's Apple Online Store down-time hints at something more than iPhone updates in the hardware side, maybe a new device or Mac is also on the way. The sources that know a lot but never tell us enough said "It's going to be a big WWDC!"