Will Sony show off full-frame Alpha dSLR at Photocina? 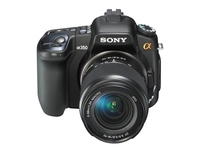 Sony has confirmed to TechRadar that they plan to show off 'something exciting' at Photocina, but stopped short of confirming that it would be their new full-frame DSLR.

Sony's Hiro Matsushita was playing his cards close to his chest when he showed off the Alpha camera range at the company's showcase event in London.

"We have said that we will be bringing out a flagship dSLR in the Alpha range," Matsushita confirmed.

"Photocina will be very exciting but we are still in the planning stage for that event at the moment."

It remains to be seen if the event will be the showcase for the latest pro level Alpha - which will feature full-frame technology, harking back to the days of 35mm film with a larger sensor.