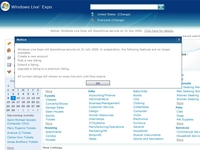 Microsoft’s ‘online social marketplace’ is to be disbanded as of 31 July, according to its website.

Similar to Craiglist, the hugely successful US online classified site, Windows Live Expo was touted as a rival, where users could refine the listings they wanted to search by location or friends.

Live Expo utilised other Windows Live services such as Messenger, Live Search Maps and Live Spaces, but even this hasn’t stopped the service from stopping at the end of July.

Although Microsoft hasn’t commented on the reasoning behind Live Expo's departure, there’s speculation that because the service wasn’t as well advertised as it could have been, it never took it off in the way the company would have hoped.

Even though Live Expo will end 31 July, any listings that are on the site will stay on there until they expire.