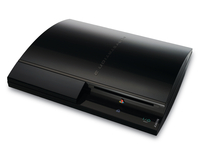 A new Experian Consumer Research survey comparing Xbox 360 and PS3 owners has thrown up some great, and frankly comedy, results.

Apparently, Xbox 360 users are more likely to say they are unable to live without books than their PS3 counterparts.

But the PS3 contingent hit back hard on the newspaper front, with way more respondents (well, 103 compared to 60) saying they would be dead if they didn't have newspapers.

The age of console owners is also interesting&hellip;with more in the 18-24 age bracket loving their Wiis, but by the time you reach 44, you're far more likely to own a PS3&hellip;almost twice as likely in fact.

You think that's funny&hellip;well read on. In a frankly pointless psychometric statement test, the PS3 and Xbox 360 owners agree Real Men Don't Cry, though the Microsoft-ers state they are More Interested In Nature.

But while the Xbox 360 folk are reading their gaming magazines, PS3 are buzzing around Go-Kart tracks the nation over or playing board games.

The only question is&hellip;why on earth are people asking these questions?

Have a look at the report yourself here (after a few forms).