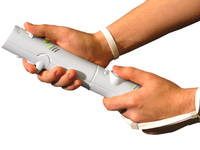 Motus is developing a break-apart motion controller for the Xbox, with three new video demos showing off the technology in use with popular Xbox 360 titles, Harry Potter, Tiger Woods Golf and Lego Star Wars.

TechRadar spoke with a Motus rep today and we expect to find out more about this exciting new technology very soon.

While it's not yet clear if this is going to be produced as a first party device by Microsoft or as a third party device directly by Motus, right now, you can see from the info and video demos on the Motus site that the 'Six Degrees of Freedom' tech (codenamed 'Darwin') is described as follows:

"Darwin uses a number of sensors that allow it to know where it is&hellip; It is self-contained, meaning what you hold is all you need, no IR strips or other devices for a reference point."

Motus also provides a comprehensive guide to how and why its technology is more advanced than Nintendo's Wii Remote. Let's not beat about the bush then!

Expect more on Motus' motion control for Xbox 360 shortly. For now, check out the video demos of